Hey y'all!  Well, my laptop is still broken.  At this point, I think it might just be gone for good.  Michael has done all the tests he can think of and everything is coming out good.  Yet, when we turn it on it just "thinks" and doesn't go past the load up page.  For the time being I am using a very old (and very busted up) laptop.  It's a mess.  And it works very slow.  So my posts will likely be few and far between.  But I'm going to try to catch us up a bit.  Most of these pictures could use their own entire post.  I just can't bring myself to spend all day trying to load pictures.  Hopefully these will suffice for now! :) 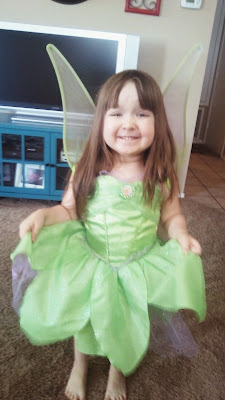 We have been visited by all sorts of princesses and fairies lately. :) 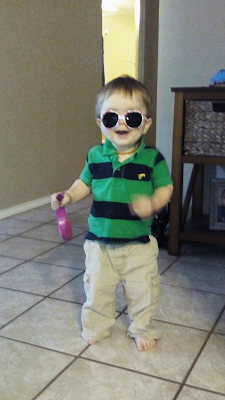 This cool dude keeps us on our toes.  He is ALL BOY, which is the complete opposite of his very girly sister.  He is into EVERYTHING, climbs EVERYTHING, and whines about EVERYTHING.  He's lucky he's cute! 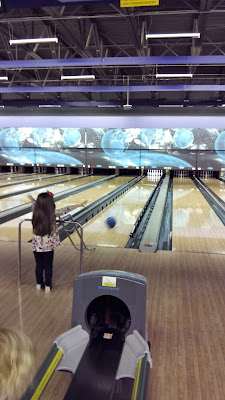 We've gone on a few play dates.  We signed up for the Kids Bowl Free program.  My friend Shaye asked us to join her and her daughter Sadie for a play date.  It was the first time either girl had bowled, and they had a blast!  If you sign up for the program, each kid can bowl two FREE games a DAY for the entire summer.  You just have to pay for shoes.  (Which was only $2.50!  Cheaper than Ohio!) 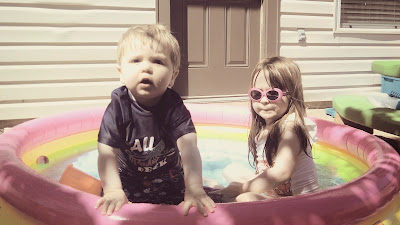 Before this ridiculous monsoon of rain we have been getting (that's another story!), we had some rather warm days.  We broke out the kiddie pool and the kids had a great time. 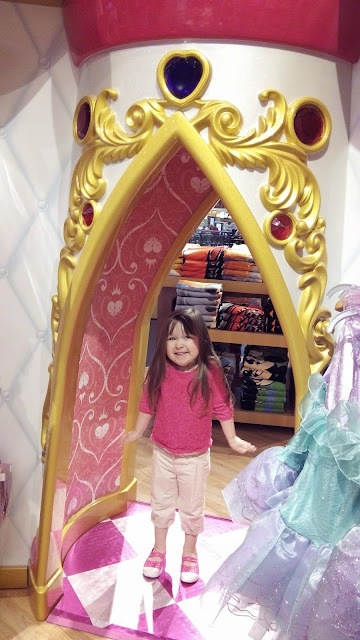 Olivia and I had a girl's date.  Which included buying some more decor for her room, exploring the Disney store, drinking a milk shake, and riding some of the kiddie rides at the mall. 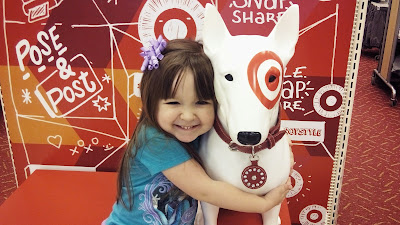 Working at Target is still going well.  I work three nights a week.  In one months time I have been trained on both cash register and service desk.  Which is a LOT of information.  I'm told I was put over at service desk so fast "because they like me".  So far, so good.  I like the people I work with.  I like the break from home life.  I like the discount.  The only thing I don't like is getting out of bed the next morning. ;) 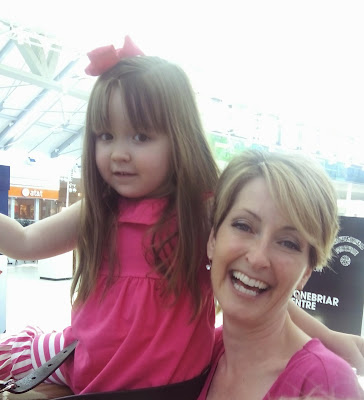 My sister came to visit us for an extended weekend.  We had a blast! 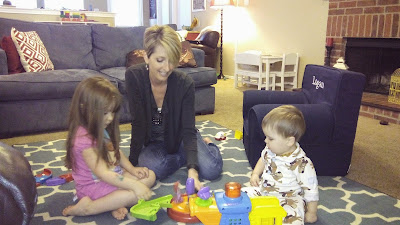 She played with and loved on the kids. They had so much fun with her! 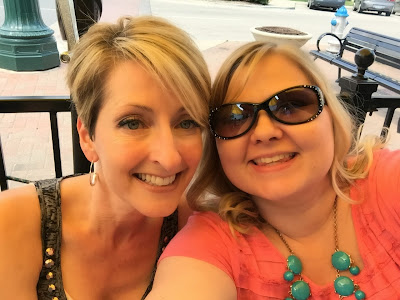 She and I shopped until we dropped.  We hit McKinney Square one day.  We ate, we talked, we walked, we shopped.  It was so nice to be having adult time with my sista!  Then we hit the outlet malls the next day.  We also ate out at lots of yummy new places.  I'm so glad she got to come and hang with me and the fam.  We are already planning a girl's weekend! 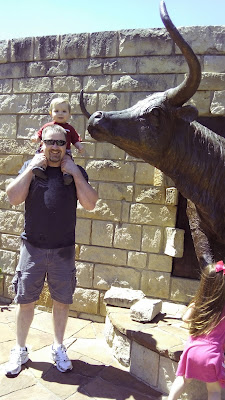 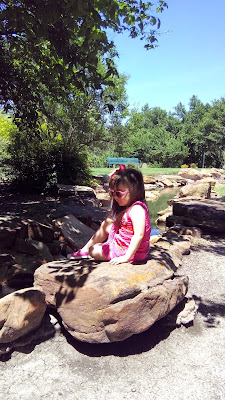 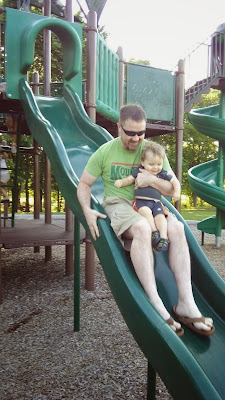 After each one we go to, Michael declares it "his new favorite"! :) 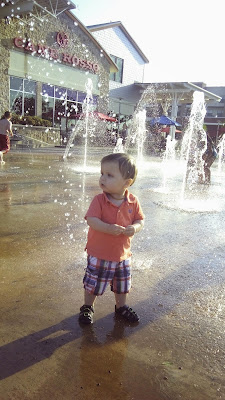 We have sort of unintentionally already played in two splash pads. 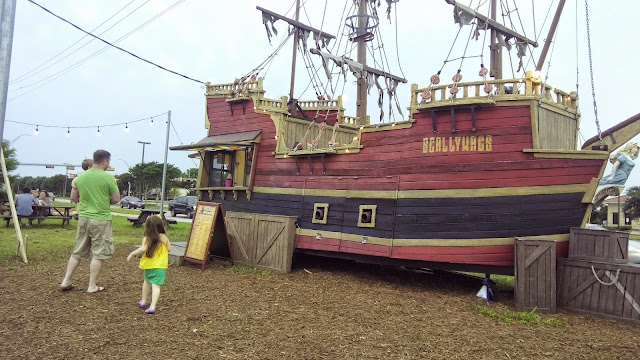 We made our first trip to the pirate ship for some shaved ice--because that's what you do in Texas.

We also got Olivia signed up and registered for preschool.  It was a bit more of a process than I was anticipating.  I really, really, really didn't want her to go until 2 p.m., but that is the way 99% of the schools do it around here.  I had found one place that ended at 12.  Perfect!  I was all set for that to be the place. Then we went on a tour.  And for various reasons it was just not the place for us.  That put us back at the drawing board.  Most preschools (and private schools) do registration in February.  So we were behind!  After touring a couple of different places, we finally found one that will work for us.  She does have to go until 2, which doesn't thrill me at all, but overall we are pleased with our choice.  So staring in the fall she will go from 9 to 2 on Tuesday's and Thursday's. She can't wait!! A few weeks ago she said to me, "You found me a church, now find me a new preschool."  Ha ha! She is very anxious to get back into all that social interaction.

Speaking of church--after revisiting the one church, we decided that it wasn't really for us.  You know you are old when the light show and smoke effects put you over the edge. ;)  We have a list of a few more to try.  My goal is to get settled soon so that we can get involved!

We are all registered for MOPS.  It won't start up again until September, but they do registration now.  Our limit is 160 women because of child care, and they were already at 130 as of yesterday!  It is a great group, so it fills up fast!  Here's a funny story--while I was on my play date with Shaye she said, "It's too bad you can't be on steering or being a table group leader."  Those positions get filled in late February/early March, so I wasn't even in town when they were being decided.  I said I was just going to go this next year, get back into the swing of things, and then see.  Not two hours later, I got a text from my friend Lora asking if I would be interested in being a group leader. I said sure.  What I found out later is that one of the mom's had to step down. She told Berkley (who is in charge of the table leaders).  Within an hour of her telling Berkley she had to step down, Lora went up to Berkley at the MOPS meeting and told her about me and that I would be interested in being a table leader if she needed me.  All that to say, I will be a table leader next year, and it seems as though God had it all worked out for me!

This is also one of the reasons I am only sending Olivia to preschool two days.  She can come with me to MOPS three Wednesdays out of the month. It is included in my dues anyway, and I really want her to be involved with the kids at MOPS too.  That way when we do play dates and stuff, she may know some of them and feel more comfortable.  I can't wait for fall to get here!!!

There you have it.  That's what we've been up to.  I hope to post more soon!
Posted by themanylayersofme at 11:53 AM 1 comment: